Our brother, John Ryan, died sometime during the weekend of August 28-30, although the official date of his death is September 1, we were notified on the 31st, a day earlier.  Some things just don’t make sense.

John was a typical Ryan boy in many respects.  We were more than outlaws; we were collectively and individually terrorists in the minds of many Vail, Iowa, residents.  I’ll get some disagreement here, but John never really searched for trouble; it found him – often.  And although John had friends, he was a loner for much of his life.  Unfortunately, John was addicted to just about anything a person can be addicted to, except religion.  Gambling, drinking, drugs, sex, food, and the list goes on into areas I never knew were addictive.

Maybe John was in more trouble than the rest of us boys, it could be because he was caught more often.  John is the only person I have ever known to be cited for  “nightwalking.”  “One who walks the street at night is a night walker. Night Walkers are of suspicious appearance and behavior. The term denotes persons who sleep by day and walk by night. The purpose of such behavior can be commission of crime, nuisance, mischief or to disturb peace. Night Walkers are subject to criminal law in respect to misdemeanors actually committed.”  The circumstances were strange.  He was walking by the softball field around 11:00 pm.  There was a town curfew for juveniles, but he was over eighteen years old.  I suspect there was a conversation of which I am unaware.  He didn’t actually respect law and order.

He rarely showed emotion, concern, or disappointment.  There is no doubt that he was smart, but he was also lazy.  He was short 3 credit hours of earning an associate’s degree in golf course management.  His GPA was more than respectable.  No one knows why he wouldn’t complete the course.  He also started his own cleaning business in Omaha, which was successful, until he hired two of my brothers to work for him.

He was creative.  My favorite story about John is the one in which he was homeless at one point and asked if he could rent a room in my basement.  I didn’t want him sleeping outside, and I knew he couldn’t afford much, so we agreed that he would pay my first wife, Terri, one dollar a day for every day he stayed there.

One Saturday afternoon, I stopped at the Lincoln Club (better known as “Lucky’s”) in Vail after playing 18 holes of golf.  He approached me and asked if he could borrow fifty bucks.  I was reluctant, but he promised he would have the money by Monday.  I gave him the $50, he bought me a beer and drank one with me, and left the bar.  When I arrived home, Terri smiled and said, “guess what?  John was behind on rent and I brought it up to him.  Today, he finally paid the forty-five dollars in arears.”  I went down to the basement, drained his waterbed and sold it for thirty dollars.

John didn’t make the world a better place, as many of us strive to achieve, but it wasn’t a part of his life’s goal, either.  He had no ‘legal’ offspring, as far as any of us know.  However, one cold winter afternoon, I was home alone and the doorbell rang.  I looked outside.  A small woman with a baby in her arms was standing on the stoop.  Being cold and windy, I invited her in to keep the child from the bitter cold wind.  She said, “I would like to introduce you to your son (or daughter, I don’t remember; it was such a shock)”.  I had to tell her that she was sorely mistaken.  I had never seen her before in my life.  I realized almost immediately what had occurred.  John used my name, and it wasn’t the first time.  He had used this modus operandi of using my name, previously.

There are numerous John stories out there.  I can’t begin to write them all in a small blog.  I don’t intend to write a book, either.  All I want to accomplish is some small tribute to a brother that went from trouble to recluse.  The last time a family member had seen John was when I was traveling to Michigan’s Northern Peninsula circa 1997 and Robin and I stopped in Hancock, WI, to see him and his new wife, Judy.  Prior to that, I doubt anyone in the family had seen him since 1990 or the late 1980s.  Even John’s wife, Judy, hadn’t seen him in two years prior to his death.  My brother Joe provided the photo below of John and his friend, Patti.  We don’t know when it was taken. 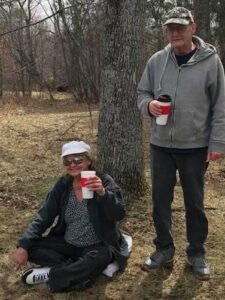 I learned how to play chess at an early age.  I become quite good at it.  I had purchased some books and read about moves – the Queen’s Gambit, the Italian Defense, etc. (Other than playing my grandson, I have quit playing chess; don’t challenge me.)  It was the early 1990s and big news was the World Championship between Bobby Fisher and Boris Spassky.  It seems like everyone was paying attention to the matches on a daily basis.  Conversation in a bar led me to teach several patrons how to play.  Eventually, Mick Buck set up a tournament.  I suppose I was favored to win it.

When I noticed that John had entered the tournament, I questioned him: “You know how to play chess?”  He gave me some simple answer and I gave it no more thought, until I had to play him in the early rounds.  He was sharp and knowledgeable about moves and defenses.  He had me scrambling to save my queen, and when that was gone, my king.  He beat me!  I found out after the tournament that he went into my bedroom and borrowed my books.  Of course, I should have known, money was involved.  It probably wasn’t much, but I know he won back more than the entry fee.

He did things like that.  He managed to die on a day other than the official date on his death certificate.

There are several times in my life when someone would criticize or curse one of my bothers in front of my mom.  She took the side of her boys, which wasn’t easy.  “They’re my sons, and I love them unconditionally!”  John was often “the least of my brethren,” but like mom, I loved him unconditionally.  Rest in peace, John.  Finally!

This entry was posted in General and tagged John Patrick Ryan, Nightwalking. Bookmark the permalink.